"To me each and every photograph of Avatar Meher Baba —the Beloved Godman—is very precious. It is a portrayal of the Divine coming amongst us in human form."
—Mehera J. Irani

* Courtesy of the photo archives of Sufism Reoriented 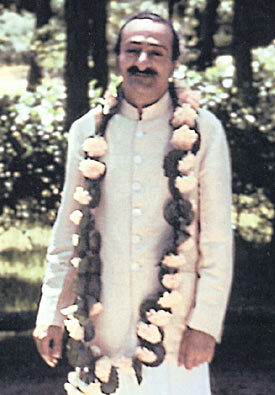 On a typical day during Meher Baba’s stay at the Center in 1952, he would take a walk to the beach in the early morning, have private interviews in the late morning, outdoor recreation in the afternoon, and intimate gatherings for jokes, stories of his early life, and readings of spiritual poetry in the evening. 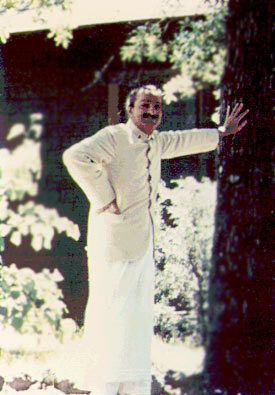 When Meher Baba first arrived at the Center and was brought to his house, he spelled out, “Of all the homes I have visited, this is the home that I love the best, because it was given to me and built for me with such love.” After a bit he added, “I never leave. Remember, I do not leave because this is my home.” 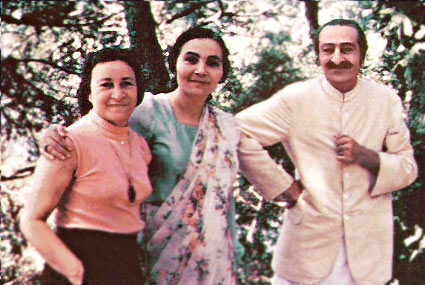 One of the individuals who met Meher Baba for the first time on the Open Day, gave this description, “As I hesitated at the entrance Baba rose from his chair and stood with outstretched open arms to me. The next thing I knew I was weeping my heart out on the Beloved’s shoulder at the joy of having found my home at last.” 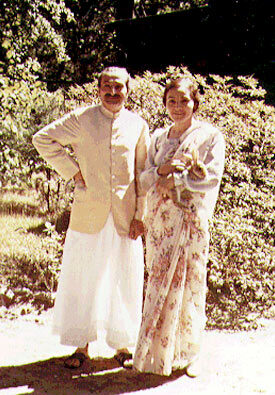 1952 was the only time Meher Baba was accompanied by his Eastern women mandali (disciples) on a visit to the Center. Mani gave this description, “The situation is most inexpressively beautiful. Mehera’s little bedroom with pink furniture is facing the lake and there are acres and acres of grounds for beautiful walks in the woods.” 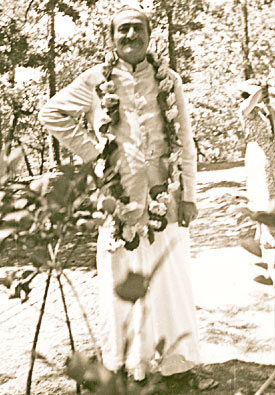 Meher Baba’s 1952 visit to the Center was the most lengthy of his three visits, lasting a month, from April 20th until May 20th. Several of his mandali (close disciples) accompanied him on this trip: Mehera, Mani, Meheru, Goher, Rano, Kitty, Adi Sr., Sarosh, Meherjee, Gustadji, Dr. Nilu, and Dr. Donkin. 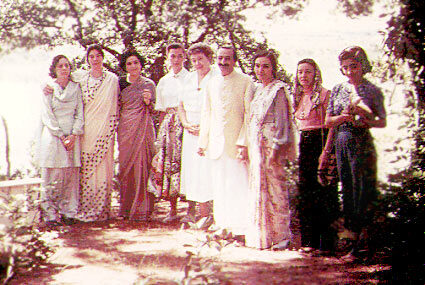 As related by Kitty Davy: “In the afternoons, Baba often suggested games outdoors. Margaret [Craske] was always called when Baba wanted us to have recreation. One time it was croquet on the grounds outside the Guest House. Did we play fair? Why ask? With Baba it was not the winning but the fun.” 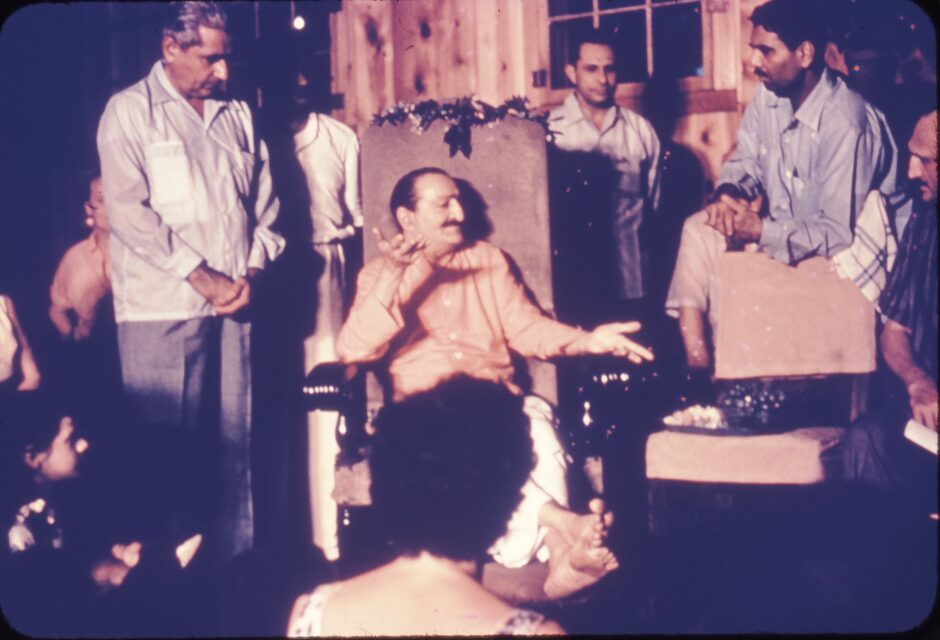 Meher Baba in the Barn with Adi, Nilu, Meherjee and Eruch, Meher Center. 1956*

Meher Baba’s stay at the Center in 1956 was part of a world tour that included stops in Europe, New York, Los Angeles, San Francisco and Australia. At the Center, he met many people individually or in small groups in the Lagoon Cabin, and some large gatherings were held in the Barn where many discourses and talks on various subjects were given. 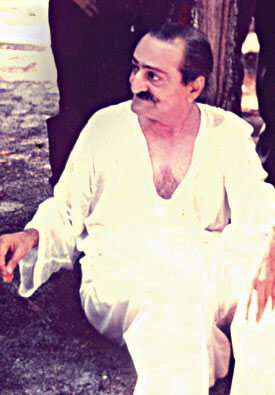 Meher Baba’s visit to the Center in 1956 was the most brief of his three stays, lasting just six days, July 24 - 30. He was accompanied by four of his men mandali, Eruch Jessawala, Adi K. Irani, Dr. Nilu, and Meherjee Karkaria. About 80 people came to be with Baba at the Center during this visit, some having to sleep at nearby motels. 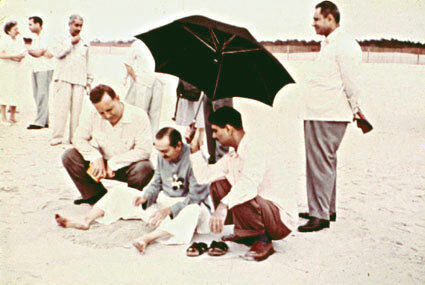 Meher Baba on the beach with Lud Dimpfl and Eruch, Meher Center. 1956

One morning Meher Baba and the group went down to the beach. Baba said he had promised Mehera to bring her back seven shells from the Center beach, and asked the group to help him find some good ones. To one individual, Baba stated, “This ocean has a shore. I am the Shoreless Ocean.” 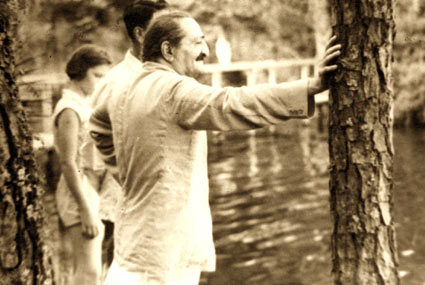 Meher Baba by Long Lake on the Center, Meher Center. 1956

At one point during his 1956 visit, Meher Baba stated, “I am like a child, playful, free, and also like an old man. I am soft as butter and hard as steel – simultaneously. Only those who love me sincerely, with all their hearts, can know me a little. Mind can never know me, mind can never touch me. I am beyond that, beyond mind.” 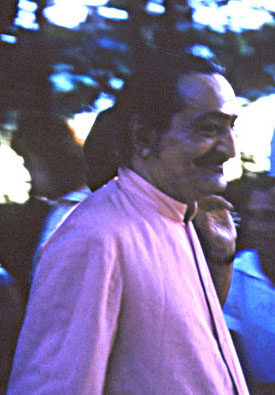 On one occasion, Meher Baba invited everyone to his house. He stated, “Of all the places in the world, I feel most comfortable in this house; even though the climate is hot and humid, I like this place.” Baba then stood on the porch like a gracious host and all were invited to see everything inside the house. 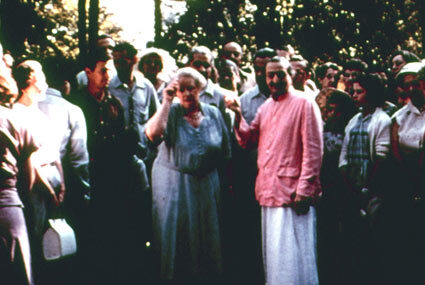 In an interview at this time Meher Baba was asked why God allowed suffering. He replied, in part, “Only because of the infinite love and mercy of God can man learn to realize through the lessons of misery on earth that inherent in him is the source of infinite bliss and that all suffering is his labor of love to unveil his own infinite Self.” 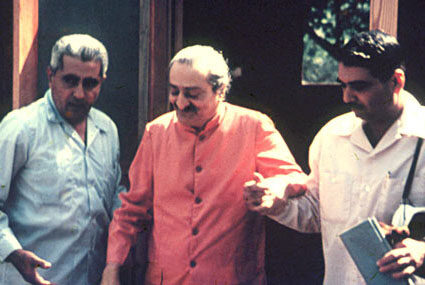 Having suffered damage to his hip, Meher Baba had to be supported as he walked, or carried in a chair, when he visited in 1958. There were usually large gatherings in the Barn in the mornings, and interviews with small groups or individuals in the Lagoon Cabin in the afternoons. 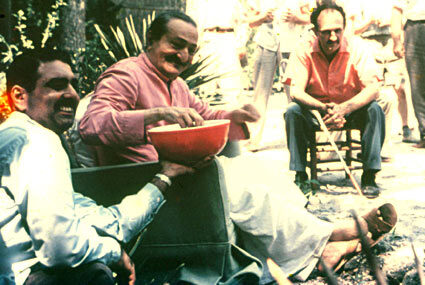 Meher Baba’s visit to the Center in 1958 lasted from May 17th until the 30th. He was accompanied by Eruch Jessawala, Adi K. Irani, Nariman Dadachanji, and Dr. William Donkin. About 225 people, from all over the U.S. and Europe, came to be with Baba at the Center at this time, most of whom had to sleep in nearby motels. 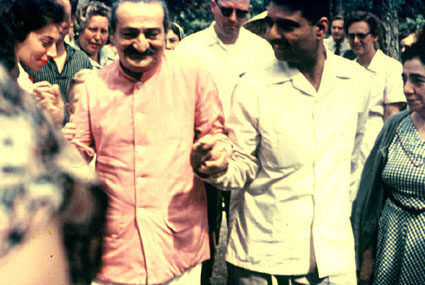 During Meher Baba’s 1958 visit, there was a special “birthday” party for all the children. There was a long table of about 40 children seated in front of Baba. The children were served lemonade and cake and each received a loving embrace from Baba. Then the children were taken on rides in the gondola on the lake. 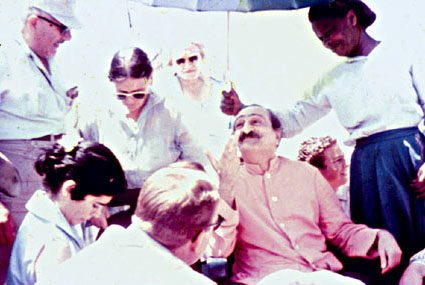 As on his previous visits, there was music and entertainment during Meher Baba’s 1958 visit. Eastern and Western music was played and Baba interpreted the meaning of several Eastern devotional songs. There was a dance performance by professional dancers, and also a show of skits and jokes called the “Alligator Club.” 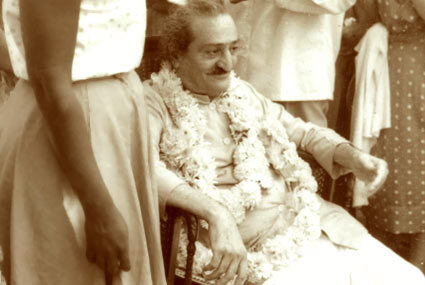 One person had this experience with Meher Baba in 1958: “The look of love in his eyes was so strong and so powerful that had I not been seated, it would have knocked me down. I knew at that moment that he loved me in a way that was greater than all the love from all of my friends and family combined.” 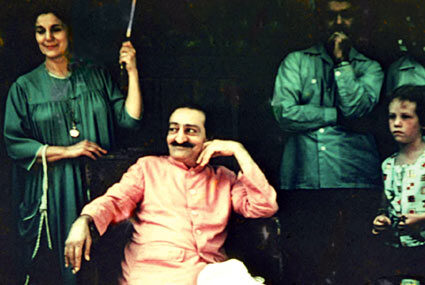 Near the end of his 1958 visit, Meher Baba expressed his wish that there should be greater activity at the Center from then on. He was asked who could come to the Center. Baba replied with a very illuminating smile, “Those who love and follow me and those who know of me and want to know more.”